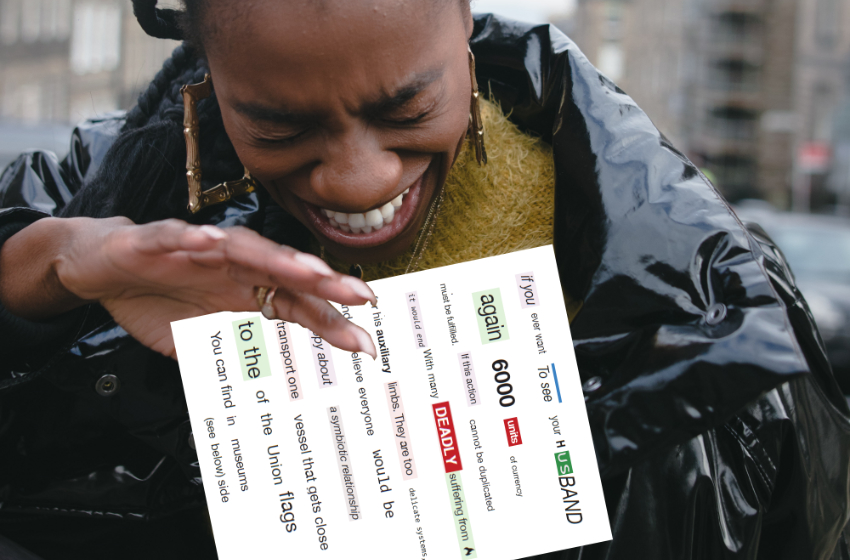 Albuquerque, New Mexico, resident Sarah Carson has reported her husband Andrew as kidnapped, though police are claiming that she is a lead suspect after finding her laughing uproariously over the ransom letter. Officer Mulaney, who was on the scene, said, “while we understand that grief can take many forms, it is highly suspicious to find a victim taking a picture of the ransom note to post for internet clout.” Further investigation also revealed that the various letters of the note had been cut out of Carson’s own copy of the Lancer roleplaying game.

Through tears and hiccups, Carson tried to explain her side of the situation. “There’s this—there’s this thing on the Lancer reddit and Discord where the words from the book are chopped out and put back together in a funny way. Like having Harrison frames apologize for war crimes, or making a Balor talk about its burning Horussy.” We had to wait a while as she continued to laugh. “I don’t want to be like this! I want my husband back,” she said in between wheezes. “But just the sight of the mismatched letters and fonts explaining where to drop the money is enough to give me a fit.”

Though the police have scolded Sarah Carson for her use of the internet during an active investigation, they admit that they have been able to make progress on the case thanks to the large number of calls sent to the Albuquerque Police tip hotline. “We are incredibly grateful for the tips received from the online community,” said Officer Mulaney. “Though there have been in an inordinate number of calls signing off by calling us anthrochauvinist SecComm pigs. While we are used to such delinquent farmyard insults, the others are mostly just confusing.”