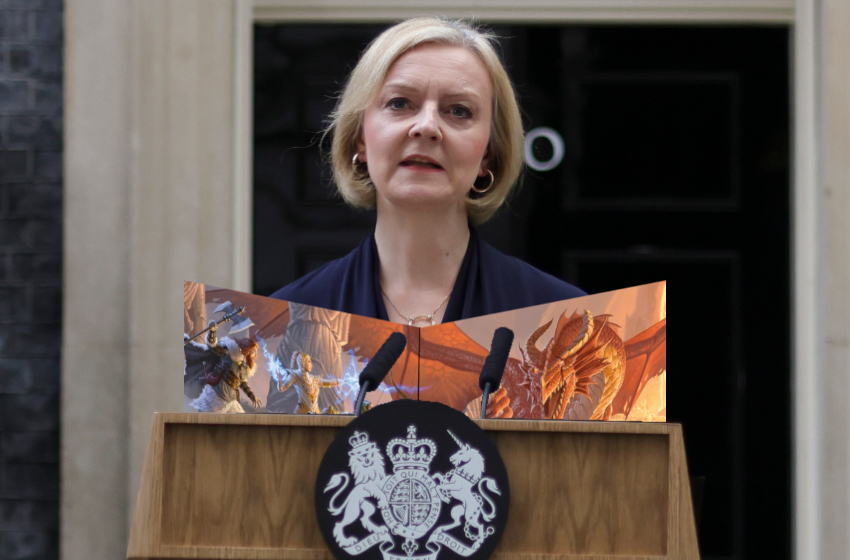 In the wake of Boris Johnson stepping down from his political intrigue campaign, former player Liz Truss said she would take over, but has apparently found the job too difficult to run more than 6 sessions. Players say that Truss tried to start her campaign strong by killing the queen of the country, but they didn’t bite the plot hook. “We thought it was natural causes,” said one player, “so we didn’t think we were supposed to go investigate it. I mean, if you spend that much time emphasizing how long the queen’s been in power, joking about how old she is, and then she croaks, what else were we supposed to do?”

Another controversial decision by Truss was to ruin the economy of the country, essentially wiping out the savings her player’s heroes had accumulated in the previous adventures, saving up for their characters’ retirement as tavern owners. “I get that she’s trying to get us motivated,” another player said, “to make us go out and take on these mercantile groups and get our money back, but it’s really just not done in a fun way? Like, she just does everything so quickly, with no build up at all. So I guess it doesn’t surprise me that she’s already quitting.”

“The fact of the matter is, I’m a fighter, not a dungeon master,” Truss said as she left the post. “I’ve seen what it takes to DM in these six sessions, and frankly I don’t like it. I much prefer swinging my greatsword around and chopping heads. But I’d like to see anyone else do better.” She thought for a moment before adding, “except for Boris. I don’t think I could stand seeing that smug grin on his face if he started running things again.”