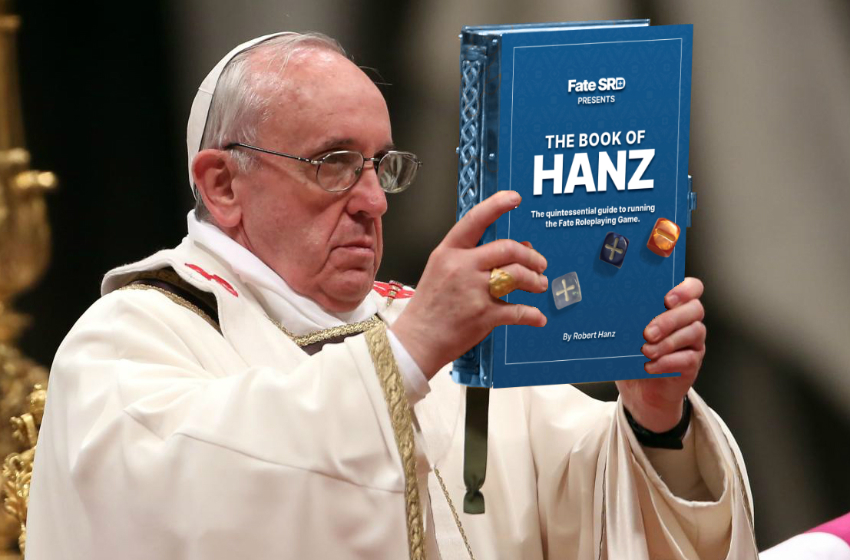 In an unprecedented gathering of the various denominations and sects of the Christian faith, the Bible has been expanded to include the Book of Hanz, a third-party guide to running the FATE roleplaying game. Pope Francis gave an elated announcement upon the successful vote. “For years, the Book of Hanz has guided players to better understand FATE. My weekend game with the Swiss Guard has never been better since I’ve studied his gospel. Like our spiritual forebears, Hanz reminds us that failure, like sin, is inevitable, but it is not the end.”

The Book of Hanz has been widely circulated on forums and message board since the 2010s, but it was the discovery of PDFs on clay flash drives in Jordan that the call for its canonization began. Robert Hanz, who wrote the religious text said, “Little did I know that some musings on a little Google+ community in the early 300’s would become some sort of gospel.” He also mused on the religious implications of his Book. “To me, it’s all about the collaboration between those at the table, whether for setting creation, or religious schisms. If my Book was able to bring the ELCA and the Missouri Synod to the same table, or the Catholic and Orthodox churches, I think they’ve begun to learn how FATE works.”

As we were ending our interview, Hanz pulled me aside. He glanced around, as though someone might be listening to us, leaned in and whispered, “A shadow follows you, my friend. You have angered some very powerful people. I do not know whether they will challenge, contest, or enter direct conflict, but make sure you’re prepared to overcome it.” We thanked him, elated. It’s not everyday you get advice from the Hanz himself.